Aston Villa eyeing up loan moves for Chelsea stars Ross Barkley and Ruben Loftus-Cheek – but can only sign one of them due to Premier League rules.

Aston Villa are interested in a potential loan deal for Chelsea’s Ross Barkley or team-mate Ruben Loftus Cheek as they look to strengthen their midfield.

Villa had asked about Tammy Abraham earlier in the window but he didn’t want to leave Stamford Bridge. They can only sign one on loan due to Premier League rules. 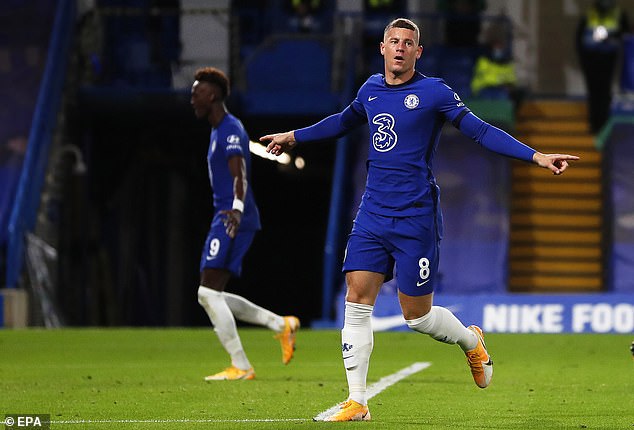 West Ham had also been interested, as they are in Antonio Rudiger, but are wary of being drawn into negotiations over a deal for Declan Rice.

David Moyes has no desire to sell Rice.

Loftus-Cheek, meanwhile, was left out after Frank Lampard was left disappointed by his performance in their opening-day win over Brighton earlier this month.

The England midfielder came in for criticism from Gary Neville after that game with the former Manchester United man saying he could have no complaints if Chelsea decided to offload him.

‘I thought, Loftus-Cheek, he’s been given his chance,’ Neville told Sky Sports after the match at Brighton.

‘I thought he was really disappointing. I don’t think Loftus-Cheek can complain. He’s been given games.

‘I don’t think he’s ever grasped his chance yet. There’s going to come a point when they’re going to cash in and get £25million for him.’

Chelsea boss Frank Lampard has been warned he is making a mistake by letting Antonio Rudiger leave this summer, as he is the club’s best defender at present. Chelsea have reportedly made Rudiger available for transfer after their summer spending spree, but Don Hutchison has warned that would be a bad idea.

Chelsea are set to start offloading players before the transfer window closes on October 5th.

The Blues have spent close to £250million after bringing in Edouard Mendy, and are still tipped to make a last-ditch move to sign Declan Rice.

However, with an abundance of players coming in, some will have to depart Stamford Bridge before the end of the window.

Tiemoue Bakayoko is being watched by Paris Saint-Germain, while Ross Barkley, Callum Hudson-Odoi, Ruben Loftus-Cheek and Danny Drinkwater have all been linked with moves away.

However, it seems they could sell Rudiger this summer, after Lampard left the defender out of his squad for the second game running.

Thiago Silva was handed his Chelsea debut on Wednesday and is expected to be Lampard’s first-choice centre-back from now on.

If Rice is signed, he will likely play alongside Silva at the back, leaving no room for Rudiger.

But Hutchison has warned that letting the German leave would be a big mistake, because he’s currently the team’s best centre-back.