Chelsea boss Frank Lampard has seemingly ended all speculation of Callum Hudson-Odoi leaving the club in the final two weeks of the transfer window. Chelsea have spent big this summer on bringing in top class talent to help boost their chances of fighting at the top of the table.

They have replaced Pedro and Willian by bringing in Timo Werner, Kai Havertz and Hakim Ziyech with the latter yet to make his debut for the club.

Werner and Havertz have lined up alongside Mason Mount in Chelsea’s opening two games of the season with Christian Pulisic and Ziyech currently both out injured.

Tammy Abraham and Olivier Giroud also remain options through the middle for Chelsea with Lampard well stocked for players in the forward positions.

The competition for places has meant limited opportunities for young Hudson-Odoi, who first broke into the first-team set up back in 2018. 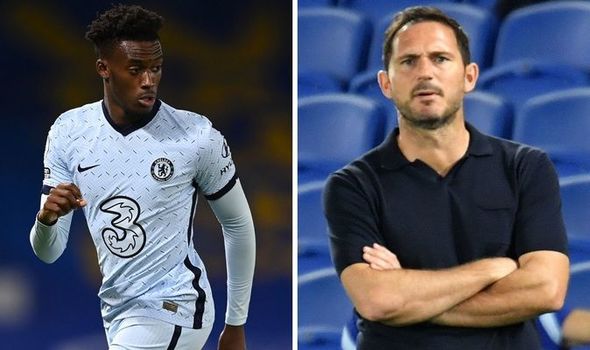 The winger was a revelation when he burst onto the scene but he’s been used sparingly since Lampard took charge.

Chelsea are also keen to trim down their squad before the transfer window closes on October 5, prompting questions on Hudson-Odoi’s future at the club.

The teenager was strongly linked with a move to Bayern 18 months ago and reports state they’re ready to try and sign the England international again this summer.