Arsenal outcast Matteo Guendouzi ‘hands in transfer request’… which could bring his sorry spell under Mikel Arteta to an end after falling out with Gunners boss in a Dubai training camp and refusing to apologise for his actions in defeat to Brighton.

Arsenal midfielder Matteo Guendouzi has handed in a transfer request at the club, according to reports.

The 21-year-old has had a sorry time under Mikel Arteta and has fallen out with the Gunners boss on a few occasions already since the Spaniard’s arrival in December last year.

The France Under-21 international has not featured for Arsenal since the ugly scenes that marred the end of their defeat at Brighton in June, but L’Equipe now claim he has now taken matters into his own hands by formally demanding a move. 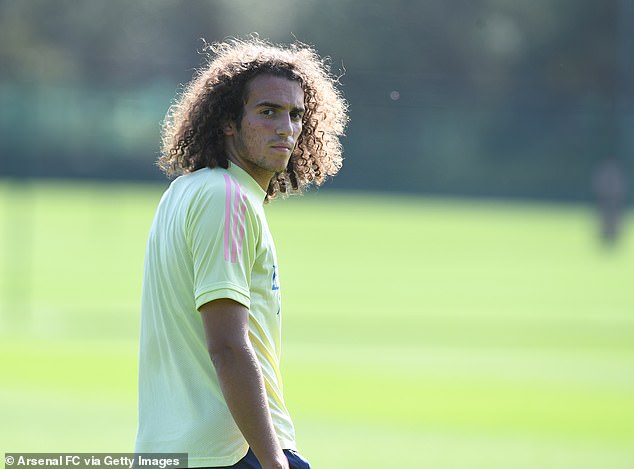 The midfielder has not featured in any of Arteta’s squads for the new season, being left out of the Community Shield victory against Liverpool and the Premier League wins against Fulham and West Ham.

The Gunners have been keen to move Guendouzi – signed in 2018 from Lorient by former boss Unai Emery – on this summer, with Lyon sporting director confirming he was offered to the club in vain as part of the negotiations for compatriot Houssem Aouar.

Guendouzi’s problems with Arteta began when he clashed with his boss during a training camp in Dubai in February, after reports he became involved in a scrap with team-mate Sokratis.

Reports in France claimed Arteta came down harder on Guendouzi than the Greek defender which the young Frenchman took exception to, and the tensions reportedly continued at the team hotel with the midfielder and manager involved in a shouting match.

It has been a good week for Arsenal on and off the pitch.

And that result came four days after captain Pierre-Emerick Aubameyang ended speculation regarding his future by putting pen-to-paper on a new contract that keeps him at the Emirates Stadium until 2023.

The Gunners had long been optimistic that the Gabon international would agree to extend his stay but confirmation will allow the club to push forward with the ambitious rebuild Arteta wants.

Part of that rebuild is a new back-up goalkeeper and Alex Runarsson has completed his move from Dijon to provide competition for Bernd Leno.

“I’m just extremely happy, extremely proud, it is a big day for me and my family. I can’t wait to get started!” he told Arsenal.com.

The Gunners are targeting at least one more midfield signing with Atletico Madrid’s Thomas Partey among the club’s main targets.

However, Atletico are insistent that they will not sell the Ghanaian international unless his buyout clause of £45million is met and have reportedly rejected two swap deal proposals.

Another midfielder being linked with a move to the Emirates is Lyon’s Houssem Aouar who reportedly wants to join a Premier League club this summer, although the Gunners need to raise funds before contemplating a deal.