Arsenal are eager to re-sign Dani Ceballos after having the midfielder on loan from Real Madrid last season. Express Sport brings you all the latest as the Gunners seek to sign the player on another temporary deal this summer.

Ceballos was a key player last season and despite an indifferent first six months at the club, he found his best form under Mikel Arteta post-restart and ended his loan spell as an FA Cup winner.

The Spanish coach has made it clear he wants Ceballos to come back to north London as Arsenal seek to agree another loan deal before the transfer window closes on October 5.

Express Sport brings you all the latest news over Ceballos’ potential return to Arsenal.

Ceballos teased his interest in returning to the Emirates on social media on Saturday during Arsenal’s Community Shield win over Liverpool.

The 24-year-old tweeted footage of him watching the match at home and uploaded a clip of Aubameyang making it 1-0 in the first half, captioned: “VAMOS @Aubameyang7 @Arsenal.”

He followed up with several more tweets, including one commending the move that led to the Gunners’ opening goal. 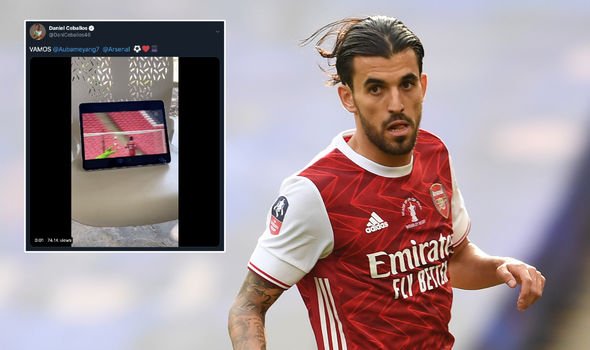 The replies were bombarded with Arsenal fans asking Ceballos to return to north London this summer.

Speaking on Thursday, Mikel Arteta confirmed that Arsenal and Real Madrid were in talks about a deal – insisting the midfielder is keen to rejoin.

But he revealed that Los Blancos had yet to make a decision as to whether or not they will loan him out again.

“Well, we have had some talks [on Ceballos],” Arteta told reporters.

“Dani knows really well what I think about him – he was pretty clear with me as well that his intention was to remain with us.

“But obviously Real Madrid are involved and we don’t know yet what they want to to do with the player.

“Obviously he is a player we are interested in because we really saw in the last months of the season what he is capable of bringing to us.”

Ceballos has apparently asked Real Madrid if he can re-sign for Real Betis if he is to leave the Spanish capital club again this summer.

He joined Madrid from Betis in 2017 after 105 first-team appearances for the Seville club.

Mundo Deportivo say that Ceballos is eager to return to Betis and that it is his favoured destination, with the player reportedly waiting for his former club to agree a deal.

Los Verdiblancos will first have to offload players to make wage bill room to afford Ceballos, who earns around £50,000 a week.

Mundo Deportivo add that with the window open until October 5, it is unlikely the midfielder’s future will be decided any time soon.