Chelsea midfielder Mason Mount showed he completely agrees with Frank Lampard’s plan to make a move for West Ham’s Declan Rice once they can push through a deal for Bayer Leverkusen star Kai Havertz.

Lampard has made Havertz his top priority signing following the additions of Hakim Ziyech and Timo Werner from Ajax and RB Leipzig respectively.

Leverkusen are demanding a £90million fee but the Blues are hoping to strike a deal around the £70m mark.

Personal terms are thought to have already been agreed and the Germany international will pen a five-year contract.

Once Havertz completes his switch to Stamford Bridge Lampard’s attention will turn to fixing his leaky defence – which conceded more goals than any other side in the top 10 this season.

Rice is seen as a top target as he can be utilised in front of the back four or he can sit deeper as a centre-back.

The 21-year-old would be available for around £50million which is well within Lampard’s budget.

It appears Mount is keen to link up with his good friend after he liked an Instagram post which claimed Chelsea had submitted a bid for Rice.

The pair were in the same age groups as they progressed through the Blues’ academy system.

Rice was released at 14 years old but quickly found a home in east London, where he graduated from their youth setup to become one of the leading players in the first team.

He has since gone on to break into Gareth Southgate’s England squad, earning seven caps.

Mount and Rice are mates off the pitch and they are keen to be reunited in west London.

Speaking in 2018 Rice explained what it was like being released by Chelsea while he was still a school boy. 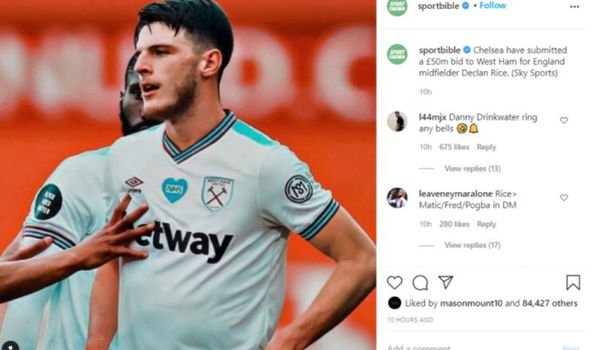 “After one session at both clubs they both wanted me. There was interest from other clubs as well but I made the switch to West Ham.

“I had to change house, change school, so it was a massive decision – and it’s paid off. When Chelsea let me go it was really deflating.

“For me, as a youngster, it’s all I ever knew – living 10 minutes from the training ground, going to loads of the games.

“It’s one of those where you’ve just got to pick yourself up and go again. I think some of the boys at Chelsea might be thinking ‘wow! Look at Dec doing well for West Ham’.”